Holy cow, you’re back! It’s great to see you again, gryphans, and we’ve got quite the week to review with you!

So, hey… Sorry I’m posting a day late. Things happen, you know? I’m here, though, and I didn’t forget about this thing we have.

Want to catch up from the beginning? My Superhero Body – Getting Started

Another week of tracking my calories down, and I have to say I’m feeling pretty good about it.

Thanks to the Samsung Health app on my phone, tracking my calories isn’t the arduous thing I was expecting it to be. There have been a few foods for which I’ve needed to put the nutritional info in manually, but thanks to the internet, it’s really not bad.

The biggest change I’m seeing with tracking my calories is that it’s beginning to change the way I look at food.

When I consider a meal, I’m starting to think of the calories and what my choices now will mean later in the day. Can I say, “Nein!” to Herr Bratwurst? I cannot, but I can say, “Auf Wiedersehen!” to Frau Bun and instead have a small snack later in the afternoon instead. Who needs extra carbs from bread? Not this guy!

The biggest example of this forethought happened yesterday at work. It was inventory day, the second most worstest day of the year after Black Friday, and to make the day suck less, the boss lady brought in two dozen great big muffins.

I took a deep breath, then asked, “How many calories are in you?” The package didn’t say, but I was able to track down nutritional info on it, and…

As it turns out, I did not need a nearly 700 calorie muffin with (Eek!) 50 grams of sugar. If I chose to eat that muffin and intended to limit myself to to 2150 calories for the day, I would pretty much be done eating for the day.

I really am getting better at eating, and becoming more aware of my food!

The next step will be to start paying attention to my macronutrients, but I’m still reading up on that.

Yeah, I’m actually starting to do some research on health stuff. Scary, right?

Wow, okay… So, my plantar fasciitis got the best of me by the end of the week. We’re talking my dogs were barking so loud that the neighbors called animal control!

So, the new shoes, right?

I have two theories:

Probably a combination of the two. Breaking in the shoes sure seemed to help, though, because Sunday night I went for my longest, fastest run to date and my feet felt better after the run than before. Now, the soles of my feet feel pretty good.

In other news, I’ve been noticing that I need to stretch more on my non workout days. I’m pretty sure I’m not stretching enough before and after workouts, but my calves, thighs, and (to a lesser extent) my arms and shoulders are much tighter than normal.

The phenomena of the “Runner’s High” is also starting to hit me when my run gets intense. On Sunday, I was getting close to home and realized I needed to add a few more blocks to my run so I wouldn’t arrive at my house before finishing my workout. I detoured a few blocks, but that put me running up a fairly large (by my flatlander standards) hill.

Running kind of sucks, but running up hills super sucks.

I would near the end of my stamina, my very breath burning in my lungs, hardly able to lift my feet, when suddenly…

It sucked just enough less for me to keep going.

Runner’s high, at least for me, is not some kind of tripped-out experience, or even a feeling of “Hell yeah, I can run forever!” No, it’s just a neurochemical “Things suck slightly less than you thought,” which is fine. It’s enough to keep me running when I really, really want to give up.

In the last week:

I actually had a lower weigh-in on Monday, coming in at 282.7 pounds, but that number was a lie. I went for my run Sunday night, but I didn’t drink any water before bed. When I weighed myself first thing in the morning, I was dehydrated! I like today’s weight much better!

Let’s try some before and after, since I’ve hit 20 pounds since we started this little experiment! 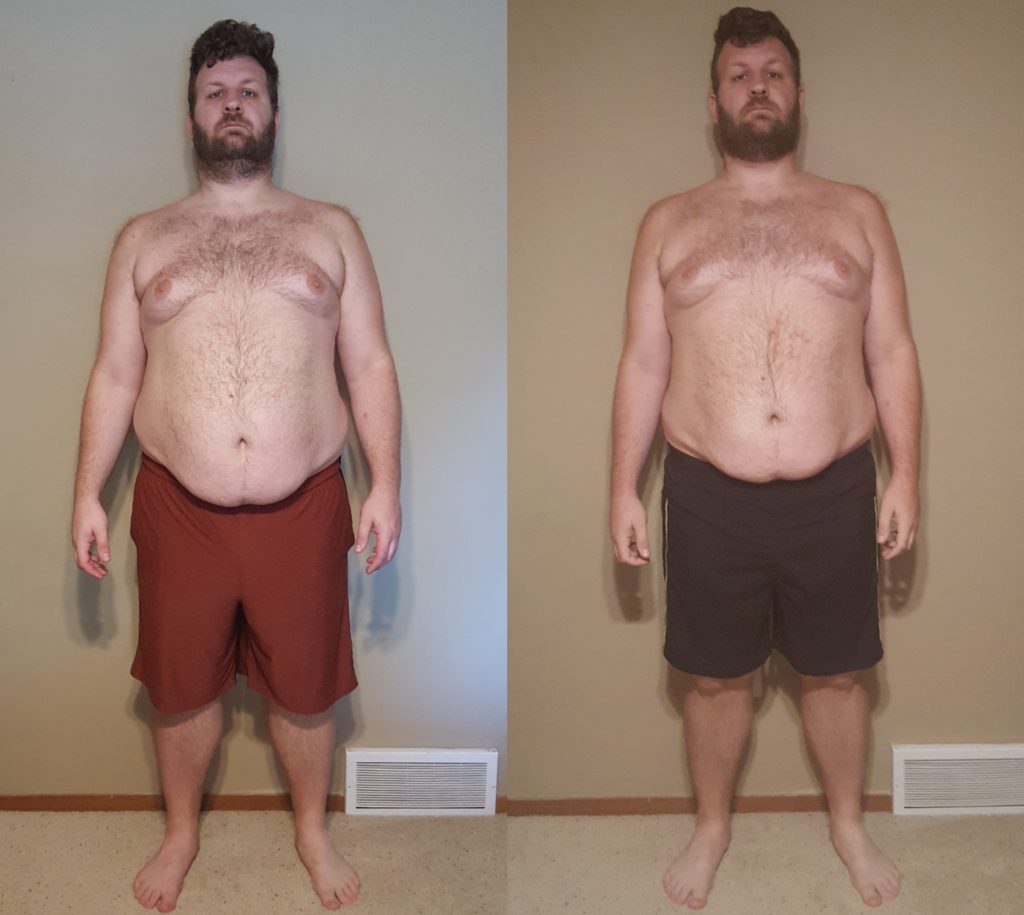 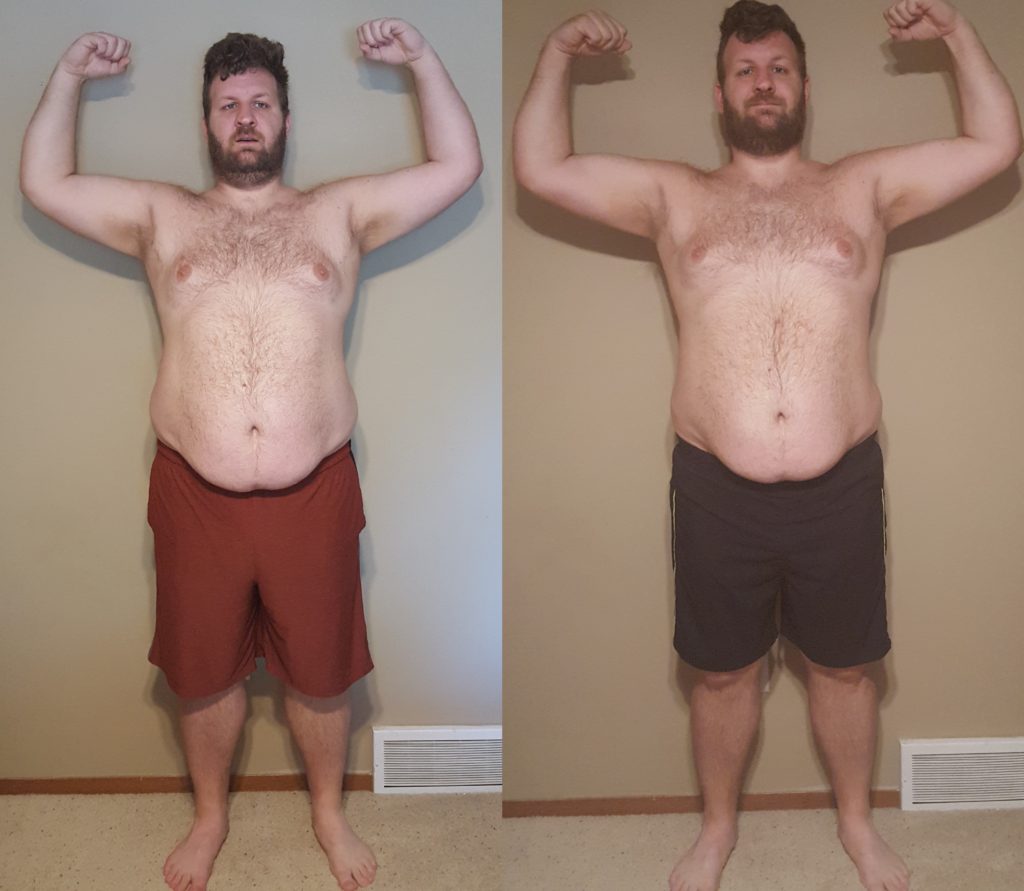 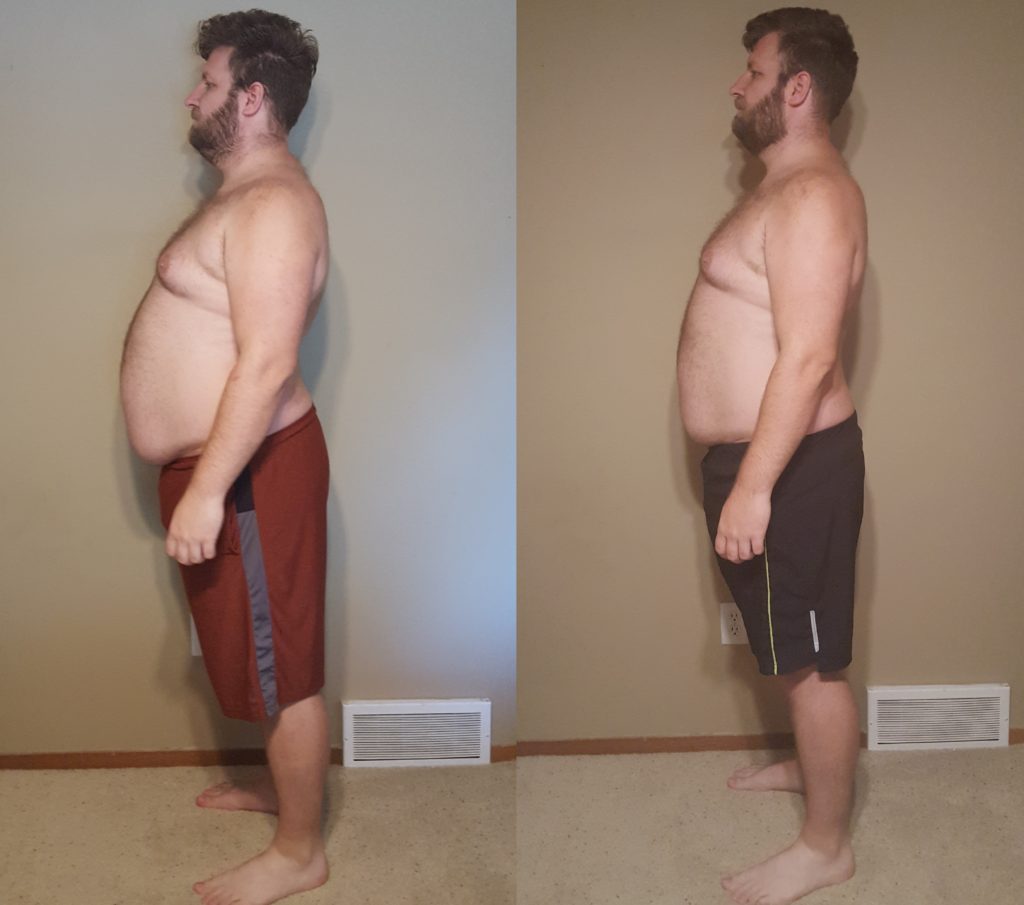 Okay, so I am able to, for the first time in a couple of years, wear size XL shirts instead of 2XL, and I’m down a couple pants sizes!

This week, diet and exercise are pretty much going to stay the same, but I’ll be researching some macronutrients and stretches so I can do both better in the future.

That’s all for this week, gryphans! Keep on truckin’!

© All images are copyrighted by their respective copyright owners.

Jake (a.k.a. Mr. Gryphon) is the mystical Golden Gryphon an Alpha Geek who enjoys building and destroying things. He's also an author of supernatural fiction and a fan of the sci-fi and fantasy genres. Visit his author website here: http://jacobcox.us/ View all posts by MrGryphon